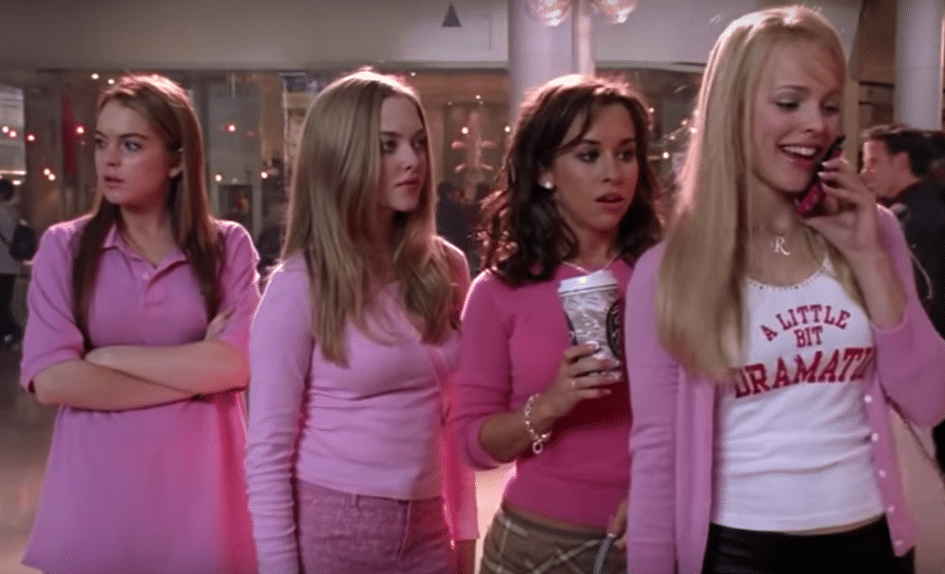 What’s the most popular High School movie of your generation?

However, the one film that seems to cross each of these generations is the 2004 cult classic, Mean Girls.

How? Well, I’d argue that there’s something so unifying and special about this hilarious film. I mean, I can’t think of many more films that appeal to my little sister (Gen Z), my mom (Gen X), and my older brother and I (both Millennials).

My father and my grandmother have even watched it a few times!

So, in honour of this cult classic, I decided to put together a list of six lessons I believe Mean Girls really teaches us about what it means to be popular and well liked in a high school setting.

1. You Shouldn’t Pretend to Be Bad At School to Be Liked

In popular culture, I’ve noticed that teenagers are often depicted as willing to alter their behaviour and appearance to attract a person they see as popular or whom they want to date.

In the film Mean Girls, lead character Cady Heron (Lindsay Lohan) goes so far as “dumb” herself down, pretending she is bad at math to get Aaron Samuel’s “help”. She also pretends to need help with a math question to get physically closer to him – something Popularity Explained calls ‘Input of Energy: Trying to Get Close.”

While the audience can clearly identify that this is a flawed plan to capture Aaron’s attention, Cady believes that Aaron will be more interested in someone whom he feels smarter (and potentially more manly) around.

Yikes! Why would she think this?

Well, likely because the ‘damsel in distress’ trope is one so many of us girls are exposed to and begin to believe – from childhood to adulthood.

Unfortunately, I’ll admit, I also felt the need to somewhat conceal my intelligence in high school, as I didn’t want others in my class to think of me as a nerd or a goody-two-shoes. And when it came to boys in my class, I also worried that by upstaging them, they may feel emasculated and embarrassed and therefore not like me.

As a young adult, I now recognize how silly and problematic those thoughts were. However, at the time, I didn’t want to stand out, I wanted to fit in and be “cool”, so it seemed like the right thing to do.

Thankfully, in the end, Cady learned that she was much happier and began to totally thrive once she embraced her love of math and joined the mathletes. As it turns out, Aaron was more interested in her when she was being her authentic self than when she pretended to be someone she wasn’t – and I think that’s an awesome take away for anyone watching.

2. Your Teachers Are There to Support You

Tina Fey plays Mrs. Norbury, a calculus teacher who sees Cady’s potential and challenges her to be her very best. To me, the reason Mrs. Norbury is such an impactful character is because she “pushes people” – just kidding!

But seriously, Mrs. Norbury is showcased as a meaningful, positive influence in Cady’s life. Mean Girls successfully sheds light on what it means to be an invested teacher who truly cares and welcomes open communication with her students. She checks in on Cady when she notices that she’s struggling and doesn’t want her to slip through the cracks, or become someone she’s not.

The lesson here: If you need support and advice, talk to a trusted teacher or adult. They’re there to support you and can be great allies as you navigate high school, college, and beyond!

I mean, we could all benefit from having a teacher like Mrs. Norbury on our side, couldn’t we?

3. Being Mean Won’t Get You Very Far

In Mean Girls, when Karen finds out Regina has been talking badly about her; she pretends she’s sick in order to get out of hanging out with her.

This is a teachable moment, as Karen has seen Regina be rude and hurtful to other people throughout the film, but once those attacks are turned toward Karen herself, she realizes how it feels and doesn’t want to be around someone who is stabbing her in the back.

Although Karen’s character is written as a bit of an ‘air-head,’ she is aware enough to identify that she deserves more, and would rather spend a night alone than hangout with someone who treats her badly – no matter how ‘popular’ Regina is.

This, in consequence, leaves Regina without any friends to turn to.

Something to think about: As identified by Popularity Explained, being popular and being well-liked are two very different things.

I don’t know about you, but I would rather be kind and liked by many that have fake friends who think I’m popular but who don’t like me at all.

4. Everyone Is Fighting Their Own Battle

You’ve heard it before, and I’ll say it again: be kind, as everyone is fighting their own battle. And it’s true.

In Mean Girls, for example, each character has a lot more going on that you might first notice:

The takeaway: When it comes to making true friends, as cheesy as sounds, we should focus more on who a person really is on the inside, rather than what they look like or how others think of them. We also need to be more aware and supportive of the human side of a person – their feelings, their goals, their fears, and their vulnerabilities.

When you wipe off the makeup and take away all of the fancy designer clothes, who is Regina George, really? What was her upbringing like? Why does she act out? What conditioned her to become so mean?

We all have a story.

Okay, this is a big one, and it’s pretty straightforward.

Not everyone is going to like you… and that’s okay.

This lesson can be a tough pill to swallow, but the reality is, you can’t please everyone. You also can’t be everything to everyone.

6. There’s Nothing Better Than Being Yourself

This is perfectly exemplified by Janis and Damian at the end of the film, as they finally begin to feel genuinely comfortable and happy in a school setting, no longer holding on to anger or resentment. They rock their matching purple suits and have a blast dancing the night away.

Final lesson: When you boil it all down, good, honest, and dependable friendships are worth much more than being part of the popular clique. There is only one you – so be yourself.

For more information, check out our FAQ on Popularity, ‘Some Questions Answered’.