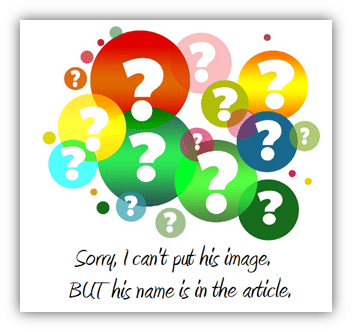 I am sure I am the winner of this competition, even without getting the prize. Keep reading and you will know why I am definite

Popularity MAY be defined in terms of liking, however it is much closer to being in the public eye. So the popular person is the one you admire or the one you want to know more about him, trying to trace his steps

The most popular person now is Mohammed (profit of Islam). Why? Well, my readers are classified into 3 categories and you will notice that all categories either admire Mohamed or want to know how he was selected – by Michael H. Hart, the Jewish American astrophysicist in his famous book “The 100: A Ranking of the Most Influential Persons in History”1 – as the most Influential Persons in history.

Mohammed is their unquestionable choice, because any Muslim  knows that his Islam could not be completed until he loves God and Mohamed more than anything in his life. In addition, Mohamed will intercede for Muslims on the Day of Resurrection, so they repeat his name 5 times a day after Azan and mention this name at least 10 times a day in their praying. However the most significant reason they choose him as the popular person is that  they believe in the Quran Surah 94 verse 4 “And we raised high your name.“, which indicates God’s promise of rising Mohamed’s name as an evidence of his dominance.

Second Category:  People with no idea about him

After reading this article, they may become curious to know more about Mohamed, who died 1400 years ago and still his religion is spreading out.  According to a study in 2015, Islam has 1.8 billion adherents, making up about 24.1% of the world population2. This part mentions stories about real persons convert to Islam after reading Quran and Sunna (Mohammad’s talks). Most of these people were scientists, when they were about to announce their discoveries, voices whispered in their ears “This scientific facts is already in the Quran, mentioned by Mohammed”.

The French scientist, Dr. Maurice Bucaille accepted Islam after Examining the body of Pharaoh, he was amazed by the fact that how could his body remain intact in water, which is mentioned in Sura 10 verse 92 that the Pharaoh’s body will be saved after submerging2.

Mr. Jacques Yves Cousteau, the famous French oceanographer has embraced Islam after his amazing undersea discovery was confirmed by the Holy Qur’an. In deep ocean, he was surprised to find several spring of sweet palatable water within the salty sea. The sweet water of the springs was not mingling with the salty water of the sea, a Muslim Professor told him just read “It is He (Allah) Who has let free the two bodies of flowing water : One palatable and sweet, and the other salty and bitter; yet has He (Allah) made a barrier between them, a portion that is forbidden to be passed” – (Sura 25 Verse 53)”. And He (Allah) made a separating bar between the two bodies of flowing waters.” – (Sura 27: Verse 61). “He (Allah) let free the two bodies of flowing water, meeting together : between them is a barrier which they do not transgress.” – (Surah 55 Verse 19:20)3.

More real stories are in https://www.youtube.com/watch?v=WzdePKItsFk, try to get a closer look about the person who showed us the most advanced theories from 14 centuries.

Third Category: People against him

Since you are trying to prove that Mohamed is wrong, you will do your best to know more, read more, research more. That is the most significant point, as long as your read to demonstrate your view point, you will know him better and may be you will be convinced that you are and were wrong. There are several true stories about famous persons were great anti Muslims and during their studies to attack Mohamed, they converted to be Muslims.

Van Klaveren, the Dutch former anti-Muslim politician converted to Islam. He was a member of parliament for the Freedom Party (PVV) from 2010 to 2014. He was a severe opponent of Islam, saying “Islam is a lie” and “The Quran is poison,” he was even one of the anti-Islam party members. In an interview to Dutch radio, he said that he made the switch from critic to convert while writing a book about Islam. “During that writing I came across more and more things that made my view on Islam falter,”4.

McKinney, the former US soldier. His thoughts  changed dramatically from “My hatred of Islam. It was the only thing that was keeping me alive” to “I started spending hours and hours in there (a mosque), and things just made sense to me. I knew I wanted to take my Shahāda – I wanted to become a Muslim.”5.

Finally, have you heard about the film Fitna produced by Arnoud van Doorn? The global overwhelming reaction of Muslims against the film,  made him interested to learn more, so he decided to convert to Islam. “Right now I am still feeling regret for having distributed the film. I have a responsibility to correct the mistakes that I’ve done in the past.”6

Now, if you reach this point of my article, this means I already succeeded to gain one more person with a possible chance to investigate more about my popular person. That is my real winning.

I am experienced in programming and teaching all categories (IGCSE, A , AS levels and the university courses for Engineering & Sciences students)