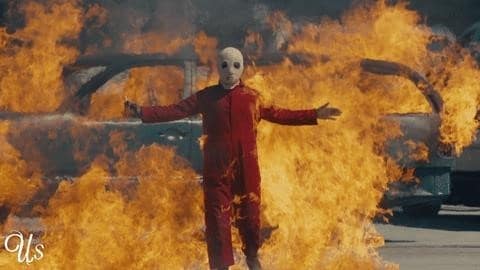 When I first saw writer and director Jordan Peele’s newest film Us (2019), I left the theater only mildly impressed and highly confused. At the time, with little available headspace to reflect, the class commentary was completely lost on me, and I was more confused by the genre of the film. Obviously, it is horror, but it was harder to peg down exactly what kind of horror. However, months later, the “Tethered” stuck with me to the point that I rented the movie to watch it hoping to categorize it better, a mission that proved difficult.

As I continued to think about the film days after I saw it in theaters, I began to understand why I was having such a problem with it. For whatever reason, I am a privileged individual. I do not live underground like the “Tethered” and my actions are not bound to another person; I was confused because the “Tethered” are not necessarily my reality, and I found myself less than scared by the situation overall. However, that does not mean that I do not understand their choices and recognize how they are mirroring, and Peele is commenting on, a systemic problem here in the United States, through a genre that has been looked down on.

When I sat down and thought of some of the biggest issues in the U.S. today, be it the Flint, Michigan water crisis or the recent issues surrounding immigration, a realization dawned on me. Every one of these issues revolves around class. And as wrong as it is, in the U.S., class and race are blended together to the point of almost becoming the same issue, which is perhaps why Peele took on the project, much like he did in his 2017 film Get Out.

Now, how does this all connect to Us being a movie about teenagers? And how is it a slasher?

Where does popularity begin? High school. High school, at its core, privileges the popular. In a system that considers reform to be the use of more standardized testing and less school funding, marginalized groups of students become less successful, giving some more advantage over others. This marginalization fuels popularity and becomes a class system in and of itself.

Watching the movie again, I noticed that not only does Us comment on the structure of racism and overall marginalization, but it also comments on the idea of popularity; what would someone else do to have what you have? And what perhaps does it mean to have an advantage over someone else?

Popularity Explained would say, Advantages Make People Want You (Rule 2) and want drives popularity. When you have something that everyone else wants, they desire to be you or to have what you have, and thus you become popular. Having the right clothes and hanging out with the right crowd keeps you up on the ladder of popularity, but it’s an unsteady one at times. Us begins to explore how popularity can go very wrong in a horror context. And even more surprising, Us has emerged as a slasher horror film, perhaps taking us straight back to the ‘80s, teens, gore, and all. Jason Voorhees anyone? When watching the film a second time I was much more impressed.

Before I get into the reasons why Us comments on popularity, here’s a quick breakdown of the film for a refresher or if you haven’t seen it yet– I recommend it!

Peel’s 2019 film Us stars Lupita Nyong’o as Adelaide Wilson, a woman who finds herself and her family (played by Winston Duke, Shahadi Wright Joseph, and Evan Alex) in a terrifying situation when doppelgängers show up to terrorize them. The film employs typical horror film scenes, with a few twists and turns, ending with the biggest twist of all; that Adelaide, who the audience has followed from the beginning, is actually one of “The Tethered.”

“The Tethered,” as the movie explains, are a group of people who live underground and exactly mirror their identical counterparts who live normal lives above ground. The problem within the film is that

Adelaide has changed places with one of “the Tethered” as a little girl and has risen up to retake her rightful place, as the character referred to as “Red.” These “Tethered” live a hateful life as they mirror the actions of their twin above, but with the objects they have at their disposal below ground. When above ground Adelaide plays with stuffed animals, the one below plays with scissors, the only item available to her. When above ground Adelaide dances, Red imitates her, jumping through the empty halls.

These doppelgängers directly represent iconic villains in horror with their red jumpsuits and growling voices; the true villain of the film. The true slasher villain of the film. Pluto (the youngest “Tethered”) even wears a mask, much like iconic killers Michael Meyers or Leatherface.

With this thought in the back of my mind, I noticed a few similarities between being a teenager and the actions of “the Tethered,” when trying to violently move their way up the ladder of privilege; trying to become “popular.” They, like the marginalized and “othered” want what their counterparts have. Though it may not be as simple as their clothing or status, the similarities are there, nonetheless.

“The Tethered” are forced to work with what they have within their means while the originals above ground are given every opportunity.

Much like the cliched “popular” crowd, having things (wealth, looks, intelligence) makes you popular because everyone then wants what you want.

The “Tethered” work in a very similar way. They realize what they do not have (because of the switch of Adelaide and Red) and become envious of what is above. They may mirror the actions of their counterparts, but they are not able to ride the roller coaster at the pier or eat a corndog, the simpler way of living. The reminder of what they don’t have is constantly part of their everyday experience. And those that are above ground are acting much like the unsuspecting victims of a slasher film. They are happy and go about their lives until it is disrupted by the violence appearance of the “Tethered” and they have to work to survive the film. The only thing missing is a final girl.

The “Tethered” rise up to take what they believe to be rightfully theirs, a move that directly coincides with the second example of Rule 2 that I found in the film.

This reasoning becomes two-fold both when thinking about how Us mirrors a high school setting, and in comparing Us to that of a slasher film. Since the Columbine tragedy, the United States has seen over 230 school shootings, many stemming from a lack of mental health education and treatment for those who are pushed beyond their bounds. Though it is impossible, in many instances, to find the motive behind something as tragic as a school shooting, many attribute them to feelings of being an outcast. One of the hardest things to do is empathize with someone who carries out a shooting in a school but beginning to understand may be a step in the right direction.

Peele is perhaps beginning that conversation with Us. The “Tethered” were developed and left on their own for so long that they understandably have a lack of mental health and that has affected their response. Living in isolation can cause anyone to rebel. When you are at the end of your rope seeing little change in your status you might react with violence as the “Tethered” have, hoping to take the place of their mirrored selves. Though the movie does not address the issue of bullying, isolation in the educational setting becomes an issue when we look at the epidemic of school shootings. Reacting violently to situations that are out of the person’s control, or that they think are out of their control, is often how individuals might respond when under extreme duress. If living underground eating rabbits isn’t extreme duress, I am not sure what is.

On the other hand, Us works much like a typical slasher film (think Halloween or Friday the 13th). There is a killer (or killers) who hunts someone (usually a group of people) in an isolated location with a weapon other than a gun. Enter slasher film. Peele may not have been focusing on bringing in elements of the slasher genre, but it becomes obvious when thinking about the human on human violence.

So mental health commentary aside, the “Tethered” are working within the genre they have been inserted into. Without the sudden act of violence, nothing would change for them. The “Tethered” are literally in a teen slasher film, and the popular are being targeted.

Outside of the film being overtly horror, what I loved most about it was the relationship to class and ultimately, it’s commentary on the idea of popularity and how Peele expertly combined these elements into a successful slasher film.

As Popularity Explained would say, when you have something that someone else does not, they want it. And yes, the “Tethered” are an extreme case, having almost nothing and reacting with extreme violence, but it doesn’t change the fact that Adelaide and those above ground have the advantage, and the life that those below want.

Though I left the theater confused the first time around, I have a newfound appreciation for Peele’s exploration of something other than what goes bump in the night. Us comments on a growing issue in the United States, and I can only hope that others will see the connection as well, as recognition is perhaps the first step toward change. Or someone will come and take the popularity from us. Whatever comes first.

Freelance writer from the USA.

How to Become a Famous & Popular YouTuber