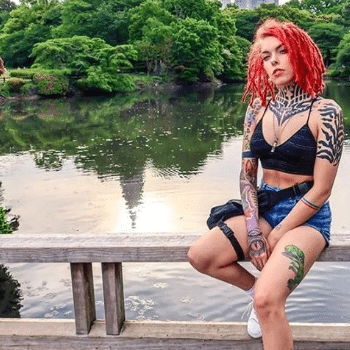 I have never been the type of person to follow the crowd. In fact, when I was ten years old I cut my hair short like a guy and dressed from head to toe in boyish baggy clothes. Whenever an unsuspecting adult greeted me as “young man” or “son”, I would revel in the fact that I was secretly a girl. My tomboy phase lasted for about two years before I started growing boobs and embracing a more feminine means of self expression. Throughout High School I was a bit of a punk, dressing in fishnets and other ridiculous items like chains and spikes. Towards the end of the teenage punk phase, I began to embrace a more bohemian aesthetic and you would find me in a crazy mismatch of second hand clothing with wild, unkempt looking hair.

Since then, bohemian fashion has gone mainstream, with millions of people putting together an “alternative” look which they buy at exorbitant prices. The irony is that their aesthetic doesn’t match with the values of self expression and individual freedom that were so central to the original movement. So many people present a fake public image by acting a certain way, or dressing in the latest trends to try and win popularity or “fit in”. For this reason I generally don’t follow a lot of people, and while I may dip into a few other YouTube channels now and then, Victoria Rose is the only influencer that I watch on a regular basis.

When I first happened across Victoria Rose on YouTube, I was immediately captivated by her stunning pink dreadlocks and unapologetic authenticity. In fact, I would even go so far as to say that I have a bit of a girl-crush on Victoria Rose. The x-factor that makes her so unique and entertaining is rooted one hundred percent in her bold and shining personality, which she fearlessly flaunts in an array of far-out tattoos. From the psychedelic eyeball on her hand to the bright green T-Rex on her thigh, Victoria Rose is a work of art inside and out. In a society that applauds conformity, it takes a certain amount of courage to stay true to who you are and wear your heart (literally) on your sleeve.

Aside from the fact that Victoria Rose is one of the most gorgeous women I have ever seen, the main reason I enjoy watching her channel is because she is so clearly a born entertainer. Unlike the rest of the more basic beauties on YouTube, she is super intelligent, down to earth and funny AF – constantly cracking jokes and larking about with her friends. The first video I ever watched of Victoria is titled “Reuniting with my Childhood Sweetheart on Tinder”, and features the most hilarious three minute sequence, where she enacts amusing romantic clichés with a male mannequin. The video includes scenes, amongst others, of her riding the mannequin “boyfriend” on a swing and slow dancing with him in the sunset. This type of creative masterpiece is a pure gem in the ocean of the internet. I literally always feel light-hearted and amused when I watch Victoria’s latest antics and honest portrayal of her life.

I love that she is not afraid to talk about how broke she is, or to mention deeper issues like her self-confessed struggles with anxiety and introversion. She is unabashedly real and talks openly about her emotions in a matter of fact way, saying things like “that’s a lot of people to be around for an introvert.” Despite her social anxiety, Victoria is constantly surrounded by friends and still manages to come across as confident and relaxed in almost all situations. Even when she is anxious, she still manages to crack jokes and look at the bright side. She has the courage to push herself out of her comfort zone and as a result, whenever she is hanging out with her friends she is surrounded by smiles and laughter.

Although Victoria Rose is popular, she breaks the traditional popularity mould because she is also liked. There is actually a major difference between being popular and being liked, but to succeed in friendship you have to be liked and liking is about how you treat others. Basically, unlike popularity – which is pretty much just a title based on how others treat you, being liked is more about how you treat other people (how you make them feel when they’re around you).

So let’s take a closer look at the ways in which Victoria Rose treats others, that makes her so likable.

1. She Owns Her Authenticity

Having the courage to be your true self is the number one quality I look for in a friend – which you never see in “popular” people. I find it especially funny, when in the spirit of pure mischievous emotion, that self pulls a metaphorical middle finger at the expectations of society by doing something that goes against the norm.

Victoria Rose is not afraid to tell the world, in almost every video, about how much she is sweating. I find this hilarious, probably because she is so hot that it comes as a surprise. It’s just so refreshing to see a Vlogger who is not stuck up, or pretending to be “perfect” by hiding her so-called flaws. Although she does enjoy to dress trendy and use make up, she is quite happy to just chill in her onesie at home with her friends as well.

Despite the fact that Victoria hates being stared at, she doesn’t let it stop her from expressing herself aesthetically and standing out from the crowd with her unique look. She signs out from every Vlog with the line “Don’t forget to stay Extra-Terrestrial” which is a fun and quirky way to celebrate universal authenticity. When you truly love and accept yourself, other people can feel relaxed around you.

It makes sense that you can’t be a likeable person if you only ever think about yourself, as typical “popular” people do. Unlike the notorious characters of Clueless / Mean Girls, Victoria Rose has many legitimate friends because she truly cares about other people’s feelings. Whenever Victoria greets her friends she gives them a huge hug and makes it totally obvious that she’s genuinely excited to see them.

I love how she isn’t afraid to express her joyful loving side, even going so far as to tell her viewers how she loves them “very, very, very much” at the end of every episode. It takes a good deal of courage and effort to be openly loving all the time, but by not holding back or trying to appear “cool” Victoria knows how to make everyone feel special and wanted.

Even though she is basically a celebrity Victoria listens properly to her friends (even when interrupted) giving them her full attention with perfect eye contact and witty responses. In the video “Dying my Girlfriend’s Hair Pink” Victoria takes Flower Friendly, a new friend of hers,  to a bench near a lake where she proceeds to dye all Flower’s dreadlocks pink.

Now, I know that over the years only three of my friends have helped me dye my hair, and to this day they are still my besties – even though one of them permed my hair backwards once. Being liked is about how you treat people, and this act of kindness shows that Victoria is not only down to help her friends out, but is also genuinely sweet and generous.

4. She Is Honest and Treats Others with Respect

Being open and honest is a major part of treating others with respect, and Victoria Rose knows how to communicate about difficult topics and handle awkward situations. About a year ago Victoria fell in love with a guy called Jason, a fellow Vlogger known as Veeoneeye. The romance began with a close friendship but after a while, in the words of Victoria, “they did things that friends don’t do”.

The drama started when she caught feelings and directly told Veeoneeye that she loved him, but for some reason he didn’t want to “put a label” on their relationship. This led to Victoria getting caught up in a love triangle involving Veeoneeye and, you guessed it, one of her closest girlfriends (also a Vlogger). Due to the public nature of the scandal, Victoria chose to release a video titled “What happened Between Veeoneeye and I.”

In the video she explained that there was indeed a third person involved, but didn’t name or shame her girlfriend in any way. She fully acknowledged that the relationship hadn’t been official and handled the whole situation with grace, maturity and respect. As a result she saved the friendship with her girlfriend, because she is a loyal and forgiving friend.

All in all, Victoria Rose is a unique and talented individual who knows how to treat people with love and respect to form lasting friendships. Her fun-loving, down to earth personality puts everyone blessed by her presence in high spirits – by letting them know they are wanted. As a result of treating others with consideration, kindness and positive energy people can relax around Victoria and she is genuinely liked by her friends and followers.